By Newsroom on May 22, 2018Comments Off on Pepsi Taps Country Music Star Dierks Bentley for ‘Generations’ Campaign

Country singer Dierks Bentley is serving as a spokesman for Pepsi Stuff, the brand’s once-popular loyalty program that’s making a comeback this year.

The initiative is part of Pepsi’s ‘Generations’ campaign that kicked off during Super Bowl LII. Meant to stir up nostalgia, the brand’s Super Bowl spot featured Cindy Crawford, Britney Spears, Michael Jackson and other famous faces that have shilled for the brand over the years. 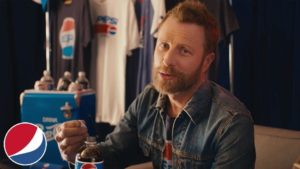 of summer, the cola maker is partnering with Bentley as he prepares to kick off his concert tour across the country, which Pepsi is sponsoring. Those who participate in Pepsi Stuff can choose from a number of giveaways, like tickets to see Bentley perform and a chance to meet him in person.

Fans of the brand can participate in Pepsi Stuff via codes found on specially-marked packaging across regular, Diet Pepsi, Pepsi Zero Sugar and Pepsi Wild Cherry.

Pepsi Taps Country Music Star Dierks Bentley for ‘Generations’ Campaign added by Newsroom on May 22, 2018
View all posts by Newsroom →