By Newsroom on June 4, 2015Comments Off on Popsicle & Marvel Collaborate To Create Marketing Superheros

Popsicle is joining the superhero craze, and the brand has tapped Marvel to help.

As part of a new superhero-themed campaign launching today, Popsicle will launch comic books featuring its orange, cherry and grape-flavored frozen treats as characters designed by Marvel Custom Solutions. The books will be released on June 21.

A preview video introduces the “Flavor Force” trio of Ace Cherry, Popsicle Pete and Mandy Orange, who do battle with “evil” and “not very nice” Lord Weathervane, who, it seems, wants to melt things.

“We think of Popsicle as the original superhero of summer,” said Nick Soukas, senior brand building director, ice cream category, for Unilever, Popsicle’s parent company. “This is an iconic brand that has a rich and amazing heritage with consumers. [This year has been] huge with all things superhero, and that was the insight that led to taking Popsicle the brand and merging it with the superhero theme.” 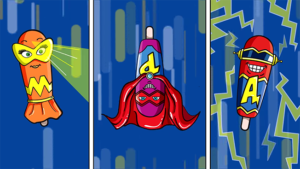 Soukas said the comic books would center around Popsicle flavors “fighting the evil forces of heat and boredom” and that it would “establish Popsicle as the superhero of summer.”

A superhero-themed hub called Deep Freeze 9 will be on the brand’s website, and Vanessa Lachey will serve as the campaign’s celebrity spokeswoman.