By Newsroom on March 14, 2017Comments Off on Pure Blonde Targets Active Aussies in ‘The Final Stretch’ Campaign

In response to the growth of the active lifestyle trend in Australia, Pure Blonde has launched a new brand campaign via Clemenger BBDO Melbourne, that breaks the norms of traditional beer marketing. The Final Stretch campaign kicks off with a TV ad that has greater resemblance to a Nike ad than a traditional beer commercial.

The campaign is designed to position Pure Blonde as the number one beer for active Australians. Fifty four percent of Australian beer and cider consumers now define themselves as ‘Healthy and Active’, meaning they exercise at least once a week and watch the food and beverages they consume. This equates to 8.3 million active Australians who are out there running, swimming and hitting the gym.

Richard Oppy, vice president for marketing, Carlton & United Breweries said: “We identified that Australians are living more and more active lives but found there was a tension between this and their desire to still be socially active and enjoy a beer with their friends.” 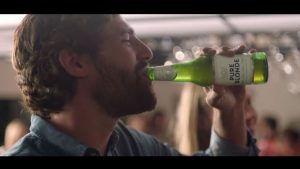 The launch TV ad takes viewers on the journey of what it means to live an active life, both physically and socially, and is designed to appeal to active men and women who work out and go out. Using a “match-cut” editing technique and an uplifting sound track the ad juxtaposes the lead character’s workout regime of boxing, swimming and running with his journey through a bar to enjoy a Pure Blonde with his friends.

The launch of the TV commercial will be supported by a $10 million media investment that also includes ads that feature Pure Blonde’s major 2017 innovation plays, Pure Blonde Cider and Pure Blonde Premium Mid. The campaign will be extended to directly target active Australians with a programmatic digital buy while also being beamed into gyms across the country.

The campaign coincides with the launch of Pure Blonde’s latest innovation, Pure Blonde Premium Mid. This new brew has only 67 calories per 355ml bottle, 0.8 standard drinks but is still full flavoured. It is designed to address the fast growing moderation trend which now sees 59% of Australians actively moderating their alcohol intake, and the reduced beer segment accounting for 20 per cent of total beer.

Oppy added: “We saw an incredible opportunity to provide a low carb and low calorie offer for the growing number of actively minded mid-strength consumers.”

This innovation is now available in retailers nationally and will be supported with a dedicated TV commercial as part of The Final Stretch campaign.

Pure Blonde Targets Active Aussies in ‘The Final Stretch’ Campaign added by Newsroom on March 14, 2017
View all posts by Newsroom →