By Newsroom on January 11, 2017Comments Off on Snickers and Skittles Team with Coach Herm Edwards for Super Bowl ‘Almost Game-Time Show’

What do you do to get ready for the Big Game? Snickers and Skittles want to know.

The Official Sponsors of Super Bowl LI have teamed up with legendary coach and ESPN analyst Herm Edwards for the Almost Game-Time Show – the Super Bowl pre-game show where fans are the stars. 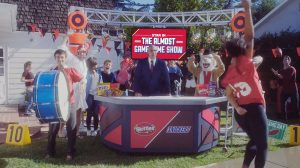 The campaign by creative agency Integer, which was developed exclusively with Wal*Mart, kicks off with a launch video featuring Herm inspiring fans to “Play to win the game.”