Set in the future, “The Homo-schlepiens” sees Mayim as an anthropologist, recalling her first encounter with a Homo-schlepien played by Kristian. The story moves backwards and forwards in time to reflect the harmful reality of plastic bottle consumption, a habit that is hazardous to the planet and does not exist in the future.

The Museum of UnNatural History featured in the video, facilitates spectacular cinematic encounters between Mayim and the last tribe of plastic dependent species, the Homo-schlepien. As a real-world neuroscientist and environmentalist, Mayim Bialik understands the importance of staying hydrated in a way that’s eco-friendly.

Shooting of the campaign was brought forward as Bialik received medical advice to rest her vocal chords for one month. 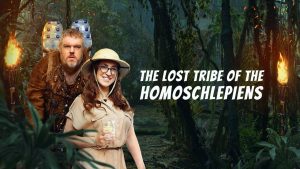 “This campaign has a powerful message and one that needed to be told before I went on vocal rest,” said Mayim Bialik. “More than one billion plastic beverage bottles are used each day around the world, the majority of which end up in our landfills, parks and oceans devastating the environment and killing marine animals. Who will speak for them and say enough is enough? I may have lost my voice but I won’t be silenced about this important message, the world needs to find their voice and say ‘no’ to polluting plastic bottles.”

The Homo-schlepiens campaign was shot in Ukraine on a set designed to transport audiences to a future free from plastic bottle pollution. The integrated campaign uses PR and digital to embed an important message while an interactive website allows users to discover the world of the Homo-schlepiens and a more sustainable way of life.

“Our new video, The Homo-schlepiens, shows how primitive it is to hydrate with single use plastic bottles that pollute our Earth,” explains Daniel Birnbaum, Chief Executive Officer of SodaStream. “It’s easy and economical to enjoy water and delicious sparkling drinks made from tap water at home and without having to pollute the planet. Using disposable plastic bottles is a prehistoric habit that belongs to the past; it’s high time for the world to evolve and create a better future for our children.”