By Newsroom on March 10, 2016Comments Off on ‘The Snackarchist’ Storms Stage at Lethal Bizzle Performance

Kerry Foods and Saatchi & Saatchi London have launched an online film featuring the Snackarchist, hero of the latest Mattessons advertising campaign, who recently lived up to his reputation by storming the stage at a Lethal Bizzle performance. 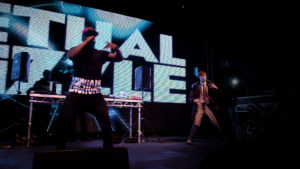 The character, a geek who flouts the rules, worked his way backstage at the performance at Hertfordshire University’s Forum, before running onstage during Lethal Bizzle’s performance of his new song ‘Dude’ – the track that features in the latest ad.

The film, which was directed by Mark Slack, a creative at Saatchi & Saatchi, documents how The Snackarchist broke a number of rules at the event, including jumping the queue, ignoring ‘No Entry’ signs and dodging the advances of venue security.

Breaking March 10, it will run on Mattessons social channels, and via the Twitter accounts of Lethal Bizzle as well as those of celebrities including Chris Kamara and Scotty T. 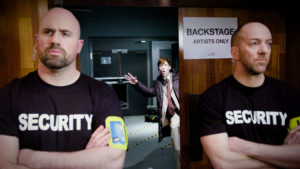 The latest Mattessons TV ad, which broke last month, stars the Snackarchist wearing a parka and rebelling against “no loitering” and “keep off the grass” signs before breaking the snacking rules by passing the crisps section in a shop and picking up some Mattessons product instead. 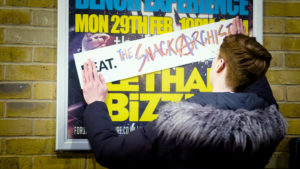 Hayley Murgett of Mattessons, commented; “The Snackarchist is a character that lives to break the rules so we wanted to bring that to life at a real event. There were certainly some close calls as The Snackarchist was almost rumbled by other gig-goers. Whether it’s storming the stage or straying from eating established snacks, the new Mattessons’ campaign – personified by ‘The Snackarchist’ character – is all about breaking the rules of everyday life.”

Andy Jex, the executive creative director at Saatchi & Saatchi London, said: “Stupidly, I thought we’d just made an ad. In fact we’ve created a monster. Whatever he’s planning next, I hope Clearcast go easy on him.”

‘The Snackarchist’ Storms Stage at Lethal Bizzle Performance added by Newsroom on March 10, 2016
View all posts by Newsroom →