By Newsroom on August 17, 2017Comments Off on Tostitos Look to Help American Football Fans Fight Team Superstitions with these Lucky Bags

From wearing special jerseys and socks to sitting on the same section of the couch every Sunday, NFL fans will do just about anything to help their favourite team win. Kicking off the 2017 season, Tostitos, the Official Chip and Dip of the NFL, is giving fans another way to help their team rack up wins in the form of lucky snacking. 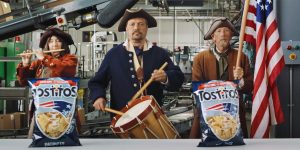 Tostitos’ new “Lucky Bags” – perhaps the luckiest tortilla chips ever made – include team-inspired packaging that celebrates official traditions of NFL teams. Giving a nod to rituals and lucky charms such as the Steelers’ Terrible Towels or Seahawks’ fans raising the 12 Flag, the Lucky Bags included their team’s traditions right from the start.

“Creating unique experiences for football fans has been at the heart of our partnership with the NFL for decades,” said Pat O’Toole, senior director of marketing, Frito-Lay North America. “Fans can now have access to these limited-edition bags to share their team pride and give their team a little luck on game day.”

And while luck and game-day rituals are at the heart of the campaign, Clowney, who stars in the Houston Texans’ spot, has an even stronger good luck charm. His mother, Josenna Clowney, a nearly 20-year employee of Frito-Lay, is part of the campaign – perhaps making the Texans’ Lucky Bags extra lucky.

“My mother is a constant source of encouragement and positivity and I always look to her for inspiration,” said Clowney, defensive end for the Texans. “With the Tostitos Lucky Bags program, I feel like I have an extra special connection. I’m going to have to keep plenty of Lucky Bags around my house this season.”

Lucky Bags will be available regionally at retailers in team markets starting August 16.