By Newsroom on July 15, 2015Comments Off on United Biscuits Takes on Mondelez with Jacob’s Cracker Crisps Launch

The race to snag a portion of the lucrative crisp market is heating up after United Biscuits launched a campaign for its new Jacob’s Cracker Crisps product just weeks after rival Mondelez embarked on a £10m attack with its Ritz brand to gain a foothold in the market.

The biscuit giant has poured £4.25m into media for the launch and is the latest investment in the Jacob’s campaign, which will receive a total of £14m support in 2015.

The advert itself sees Jacob’s ‘miniature hero’, Jacob the Baker, hitting the campaign trail to eulogise about his new Cracker Crisps. With a nod to famous historical speeches, Jacob aims to convince the masses that his Cracker Crisps can have the same flavour and satisfying crunch of a crisp.

Social media, digital and PR will back the TV ad as well as the UK’s first Savoury Cocktail Bar – a two-day pop-up in central London featuring a range of savoury cocktails developed by mixologist Matt Whiley, complementing the flavours of the crackers. Those flavours include Chilli Con Carne, Plum Spring Roll and Fish and Chips. 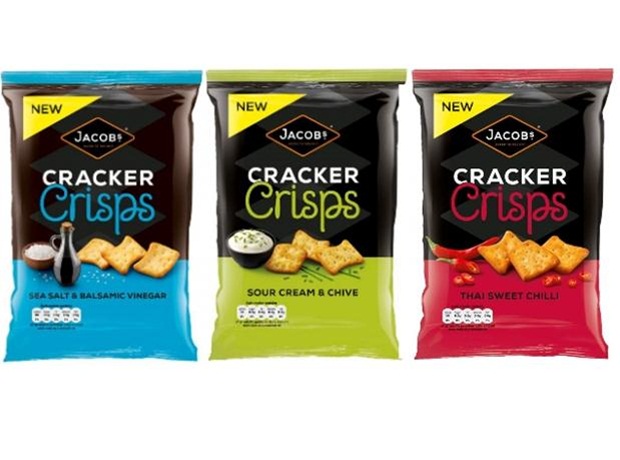 United Biscuits said the investment in Jacob’s masterbrand strategy has already seen good results, with savoury biscuits up 7 per cent in value year on year and ahead of the 5 per cent market average. The performance was buoyed by the across the biscuit range such as Jacob’s Cheddars (up 16 per cent) and Jacob’s Crackers & Crispbreads (up 12 per cent).

Ted Linehan, director of savoury brands at United Biscuits, said: “Through Jacob’s Cracker Crisps we have used our experience with these brands, alongside targeted consumer insights, to develop a new product that delivers exceptional taste and texture, meeting evolving consumer needs in this space. This is a major launch for United Biscuits, cementing our position as the consumer go-to in sharable baked snacks.”

According to Mondelez, the savoury snacking market is worth in excess of £3bn. The UK is Europe’s biggest crisp and snacks market, worth £2.2bn with 100 packets of crisps eaten per person per year.

United Biscuits Takes on Mondelez with Jacob’s Cracker Crisps Launch added by Newsroom on July 15, 2015
View all posts by Newsroom →