By Newsroom on April 9, 2018Comments Off on Walkers Trumpets 70th Anniversary with Retrospective TV Campaign by AMV BBDO

The ad consists of a compilation of clips showcasing the fashions of the second half of the 20th century and featuring crisps being consumed in various era-defining contexts.

The spot, set to the theme from Edward Elgar’s Pomp and Circumstance March No 1 – better known as Land of hope and glory – is voiced over by longtime brand spokesman Gary Lineker. 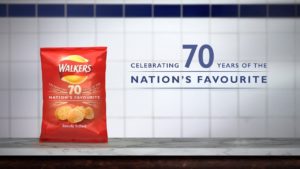 It was created by Richard McGrann and Andy Clough at Abbott Mead Vickers BBDO, and directed by Kevin Thomas through Thomas Thomas. The media agency is OMD UK.

Rachel Holms, senior marketing director at PepsiCo, said: “We wanted the ad to be a tribute to the British public and showcase how far the brand has evolved over the years, with some fun and relatable moments along the way.”