By Newsroom on June 1, 2018Comments Off on Budweiser Plays Up its Music Cred in Search-Oriented OOH Campaign 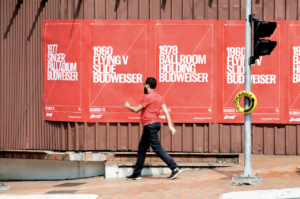 might be most associated with its iconic Clydesdales, but the beer brand has worked hard in recent years to align itself with the global music scene as well. This fall, Budweiser will host its seventh annual Made in America festival in Philadelphia, and the Anheuser-Busch brand’s new music workshop and performance series, dubbed BUDx, has taken it to India, South Korea and Chile.

In Brazil, Budweiser recently launched a clever out-of-home (OOH) campaign to promote its new tagline, “the beer behind the music”. Created by Sao Paulo-based agency Africa, the campaign asks passersby to search keywords that will lead them to photos of Budweiser cans in the hands of some of music’s biggest names. 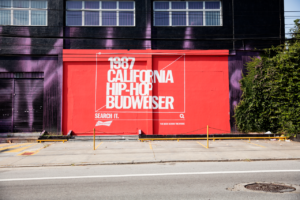 instance, one poster asks people to search the following words: 1980, Detroit, radio and Budweiser. A quick Google search of the terms brings up an image of David Lee Roth, the original singer of Van Halen, surrounded by cans of Budweiser. A different search brings up a photo of the Sex Pistols frontman John Lydon holding a can of Budweiser with his manager.

Assuming that consumers will go out of their way to search keywords they saw on an ad might be wishful thinking on Budweiser’s part, but the hope is that people whose interest is piqued by the posters will appreciate the brand’s subtle nod to its musical roots.

Budweiser Plays Up its Music Cred in Search-Oriented OOH Campaign added by Newsroom on June 1, 2018
View all posts by Newsroom →