By Newsroom on January 26, 2018Comments Off on Budweiser Switches to Water to Help Out Those in Need for its Super Bowl Ad

Budweiser has been more known for its Clydesdales, puppies and frogs in its Super Bowl ads, but its new focus for this year’s big game features the brewer helping out storm victims with water.

Since 1988, Bud’s Cartersville, Georgia brewery team has helped provide more than 79 million cans of water to cities across the US that were impacted by natural disasters. In the new spot, we see a worker being woken up, leaving his home early and heading to the brewery. The man is Kevin Fahrenkrog, the actual general manager at the Cartersville brewery. We see him walking through the brewery, then shutting down canned beer production on the line. The iconic Budweiser cans are replaced by those that the brewer fills with fresh drinking water. 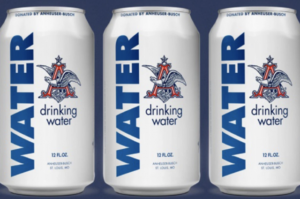 spot continues by showing the canned water being boxed up and sent to relief areas, post-disaster. As the trucks leave the brewery, text over says “Texas, Florida, Puerto Rico, California. Whenever you need us we’ll stand by you.” The ad’s soundtrack is a cover of the classic tune ‘Stand by Me’ performed by Skylar Grey.

On a page on the Budweiser website, viewers can learn more about the water relief efforts. Stats say that in 2017 alone the brewery delivered 2.9 million cans of water.

Fahrenkrog is quoted on the site: “It’s incredible to think how people join together in times of need. I’m proud to work for a company who contributes their resources for those in need.”

Budweiser has plans for the future of its water donations, saying that by the end of 2018, its brewery in Fort Collins, Colorado will be equipped to help them deliver even more clean drinking water to communities in need.

Budweiser Switches to Water to Help Out Those in Need for its Super Bowl Ad added by Newsroom on January 26, 2018
View all posts by Newsroom →