By Newsroom on September 26, 2016Comments Off on Bundaberg Rum Celebrates Time with Mates with Launch of Lazy Bear Push

Just in time for summer, Diageo Australia is launching a new television commercial and through the line campaign by Leo Burnett, Sydney to support the launch of Lazy Bear, a pre-mixed drink from Bundaberg Rum.

The TVC was shot on location in Thala Beach, North Queensland, just outside Cairns. It features five mates enjoying a lazy afternoon by the beach in hammocks, swinging in increasing arcs, like a Newton’s cradle (which they’ve constructed), before cleverly grabbing a bottle of Lazy Bear from an esky perched in a tree.

The product name and campaign were conceived by Diageo and Leo Burnett in response to the trend towards more casual daytime drinking occasions. Lazy Bear is a direct invitation to re-embrace well-earned ‘lazy time’ with your mates.

With the product name nodding towards the brand’s most famous icon, viewers will be encouraged to keep an eye out for some guest appearances by a famous figure long absent from our screen: Bundy R Bear. He makes a cameo appearance across seven different versions of the TVC where he can be spotted enjoying some well-earned ‘lazy time’ of his own. 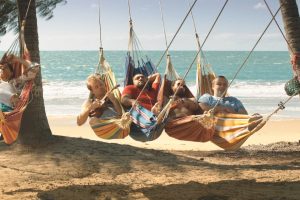 Grant McAloon, joint ECD, Leo Burnett Sydney, said: “Spending time with friends is important but we often struggle to find that time. So when it does happen, it’s something to be celebrated. So that’s what we set out to do.”

His ECD partner, Vince Lagana, added: “We’re proud to have worked so closely with Diageo on this product that moves one of its biggest brands into a new space, along with a campaign that reminds us that ‘lazy time’ is actually precious time.”

Jodi McLeod, Marketing Manager, Bundaberg Rum, said: “Bundaberg Rum Lazy Bear is our biggest premix launch in years. We have already seen an amazing response to the product from retailers as the weather starts to warm up and shoppers look for the perfect drink to accompany those summer picnics and BBQs. We’re excited to be launching a campaign that brings to life lazy time with our signature humour and reintroduces Bundy R. Bear to surprise and delight everyone whose been missing him from our screens.”

The campaign also runs across cinema, outdoor, digital and social.

Bundaberg Rum Celebrates Time with Mates with Launch of Lazy Bear Push added by Newsroom on September 26, 2016
View all posts by Newsroom →