By Newsroom on November 5, 2018Comments Off on Camden Town Brewery Team with Homeslice to Launch New Pizza-Beer 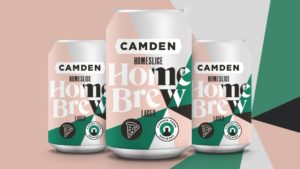 Camden Town brewery has created a Pilsner-based lager to be served exclusively at London pizza chain Homeslice, but unlike any of its other beers, the cans won’t list the ingredients used.

The brewery said the decision to list no ingredients on the can was due to the fact that the recipe, like Homeslice’s menu, will be tweaked seasonally.

The lager is described as “crisp” and “easy-drinking” with a Pilsner base and will be served in 330ml cans at the pizza chain.

Chris Wheeler, innovation brewer at Camden Town Brewery, said: “When our pals at Homeslice asked us to brew a lager for their pizzas, we happily consumed many an inspirational slice. All that delicious dough, cheese and tomato sauce inspired this fresh and crisp Pilsner-based lager. Pilsner is the perfect companion – the light breadiness of the malt bill compliments the dough, and the clean finish helps cleanse the palate. We’ll keep tweaking our recipe as Homeslice change their pizza toppings so each brew stays original and fun.” 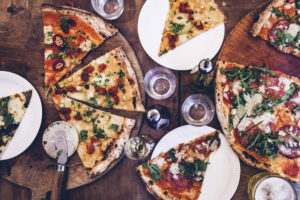 The founders of Homeslice added: “We jumped at the chance to brew our own beer with our old friends Camden Town Brewery. We like to think with their help we’ve brewed the perfect pizza-beer.”

The Camden Home Brew Lager will be available from 19 November at all five Homeslice sites and on delivery site Supper London.

The ‘Kenneth’ and the ‘Jack’ mark the brewery’s first glass re-design since 2016, and are the result of a partnership with British designer Sir Kenneth Grange, who was responsible for the iconic London Black Taxi, and Jack Smith, one half of London design duo SmithMatthias Ltd.

The glasses were designed for the on-trade, with all glasses toughened, nucleated, stackable and are CE marked pint to rim.

Camden Town Brewery Team with Homeslice to Launch New Pizza-Beer added by Newsroom on November 5, 2018
View all posts by Newsroom →