By Newsroom on May 9, 2017Comments Off on Captain Morgan Makes Rio Ferdinand a Captain Again to Launch New Global Campaign

Ex-Manchester United and England Captain Rio Ferdinand has resumed his Captain duties once more, this time alongside Captain Morgan and appearances from other well known UK sporting stars as part of a new integrated ad campaign. 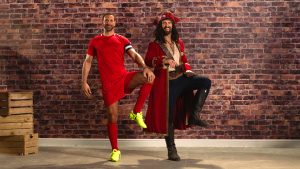 The campaign will be supported across a variety of platforms including online, experiential, on-trade and off-trade. Post launch it will roll out globally to several other markets throughout 2017 and into 2018.

Created by Anomaly New York (TV ad) and VaynerMedia (digital assets and OOH), the campaign is designed to spread the live like the captain message to a millennial audience hungry for humour and relief from today’s ever increasing pressure to be serious. 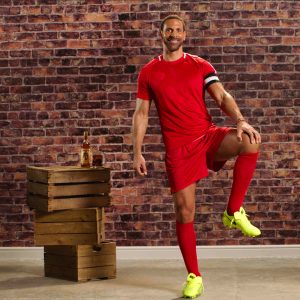 Also starring Argentinian polo Captain Nacho Figueras and a bar packed full of Captain characters from airline pilots to Navy captains, the ad sees Captain Morgan walking through a lively bar giving all the Captains a tip of his famous hat and a cheeky ‘Captain’ greeting. The entry of a man who introduces himself as just ‘Dave’ looks set to deflate the atmosphere, but he seems like a man who lives like the Captain, so Captain Morgan suggests the title ‘Captain’ applies to him too and the fun continues. It’s clear to everyone that if he’s here then he’s living like the Captain.

Anita Robinson, Category Director – Vodka, Rum, Gin and Pimms says: “This ad sees us re-defining what it means to be a Captain. Captain Morgan knows that in today’s serious times, fun is essential. We know that humour connects with our target audience and we expect that our well loved UK sports stars will ensure the campaign resonates with them and seeds the ‘Captain, Captain’ exchange in bar and beyond”.

The wider campaign will feature bold out of home, digital and social media spots in the trademark no nonsense style of Captain Morgan, focusing in on his insatiable appetite for fun and infectious humour.

Captain Morgan Makes Rio Ferdinand a Captain Again to Launch New Global Campaign added by Newsroom on May 9, 2017
View all posts by Newsroom →