By Newsroom on January 5, 2015Comments Off on Change4Life Teams with Coca-Cola, Tesco & Asda for ‘Sugar Swaps’ Push

Change4Life, the UK Government’s healthy living drive, has unveiled its traditional January campaign which this year focuses on encouraging parents to reduce the sugar intake of their children by making product swaps.

The £2.6m ‘Sugar Swaps’ campaign, created by M&C Saatchi, launches January 5 across TV, radio, digital and outdoor and will run until March. An email support programme and a national roadshow also form part of the activity. 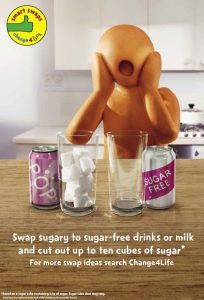 The TV creative once again uses the Aardman animation characters that have featured in the ads since Change4Life’s consumer launch in January 2009. One of the two executions ran last year but another, ‘Snack around the clock’, is new for 2015.

“It’s trying to show mums that sugar does all mount up,” commented Sheila Mitchell, marketing director of Public Health England (PHE), the government body in charge of health marketing.

Asda, Tesco, Co-op, Aldi, Morrisons and mySupermarket are among the companies helping to promote the initiative. Coca-Cola is also involved but only through its Diet Coke and Coke Zero brands and under ‘strict terms’, according to Mitchell.

To coincide with the January activity, PHE, in association with Netmums, published a survey showing that nearly half of mums think their family has too much sugar in their diets and two thirds are worried about the amount of sugar consumed by their children.

This latest Change4Life push is the last of three PHE January campaigns to launch.

Change4Life Teams with Coca-Cola, Tesco & Asda for ‘Sugar Swaps’ Push added by Newsroom on January 5, 2015
View all posts by Newsroom →