By Newsroom on October 5, 2018Comments Off on Coca-Cola Drops £4m on First Ad Campaign for Fuze Tea Brand

The brand was brought to the UK earlier in 2018 following a period of rapid growth, becoming a billion-dollar brand for Coke within just three years of its 2012 launch.

When it arrived in the UK, Coke said it would spend £4m on a marketing push to establish a footing in the competitive market. 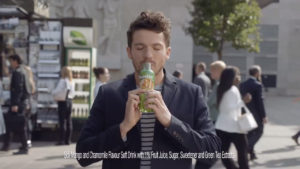 Created by ad agency Heimat Berlin, the resulting campaign – titled ‘Serve yourself a little me-time’ – shows a man in a hectic rush hour setting before everything goes into slow-motion when he picks up a bottle of the drink. A voiceover says: ‘When life around you gets hectic, pause for a moment with Fuze Tea’.

The creative will sit at the heart of a three-week marketing blitz on TV and video-on-demand. The second phase of the campaign will focus digital out-of-home advertising targeting Brits during their busiest moments.

“Our latest campaign is encouraging people to take some time out for themselves. Earlier this year our research found that 44% of Brits feel they rarely get any me-time, but if they do, it’s most likely to be at 17:05,” said Christina Lecky, senior brand manager, Fuze Tea. “We’re excited to launch burst two of our campaign and introduce our first UK TV spot, which continues upon our insight and encourages people to switch off as they commute home.” 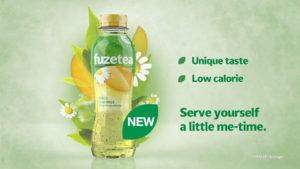 Coca-Cola has bee heavily focused on its no or low-sugar ranges after last year saw half of sales in the UK coming from no-sugar variants.

According to data from Nielsen, sales of Coke’s zero-sugar options in grocery and convenience stores are up 52% while sales of Zero Sugar and Diet Coke are matching those of Coca-Cola Classic.

It cemented a radical shift in its marketing strategy to focus on low calorie, low sugar versions of its fizzy drinks, as well as smaller pack sizes and water.