By Newsroom on December 16, 2015Comments Off on Coca-Cola Highlight Benefits of Abstention in Dedicated Driver Push 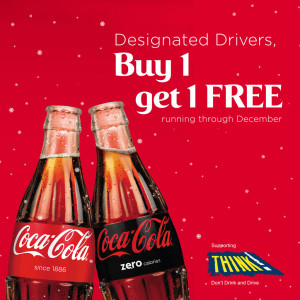 More than a quarter (27%) of UK adults will suffer from at least four hangovers during the Christmas period, while 64% expect to overindulge during festivities, according to research from Coca-Cola.

The soft drinks giant has published the findings as it gears up for its annual Designated Driver campaign, run in partnership with the Department for Transport’s THINK anti drink-driving activity.

New to 2015’s Coke campaign is the creation of an online Designated Driver Pub Finder tool to help drivers locate the 8,000 participating pubs and bars.

The beverage giants will reward drivers who abstain from alcohol during trips to the pub over the festive period, with a two-for-one offer redeemable against brands including Appletiser, Schweppes, Coca-Cola, Diet Coke, Coca-Cola Zero and Coca-Cola Life. 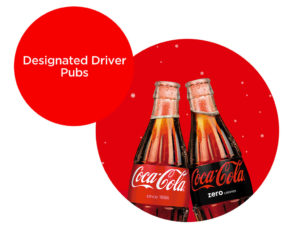 Coke has also highlighted how drinking heavily the night before can impact on Christmas tasks. More than two-thirds (67%) of those surveyed said having a big night out made it harder to prepare for Christmas. 36% claimed they could not face cooking for friends and family and 32% admitted they could not face the prospect of a big Christmas shop.

Jon Woods, Coca-Cola Great Britain’s general manager, said: “For the eighth year in a row, designated drivers at pubs across the country will be rewarded with free drinks so that they can celebrate the festive period and help to get their friends and family home safely. This is our way of thanking the unsung heroes of the festive party season, whilst helping make sure the roads are a bit safer for everyone.”

Coca-Cola Highlight Benefits of Abstention in Dedicated Driver Push added by Newsroom on December 16, 2015
View all posts by Newsroom →