By Newsroom on May 23, 2018Comments Off on Coca-Cola Upgrades Freestyle Dispenser With Bluetooth, Mobile App Requests

Coca-Cola debuted the next generation of its Freestyle soda dispenser that lets people wirelessly connect with a machine when they enter an outlet with one using a mobile app and Bluetooth. Customer can then request a drink and create new custom mixes of flavors straight from the app, according to a press release.

The Freestyle 9100’s wireless connectivity lets app users select a drink on their smartphone without scanning a QR code or interacting with the touchscreen on the dispenser. Restaurants will also be able to access real-time updates on how much product is left in the machine and when it will run out. New dispensers are equipped with microphones, speakers and optical sensors to allow for future developments.

upgraded machine was introduced at the 2018 National Restaurant Association Show in Chicago, and will roll out nationally next year. Coca-Cola has installed more than 50,000 Freestyle dispensers worldwide that serve 5 billion drinks a year. Existing dispensers will be updated with additional brands and categories, calorie displays and an update to the Freestyle app that lets users discover top beverage mixes in their region.

Coca-Cola is making its next generation of beverage machines more convenient for repeat customers with the mobile app and Bluetooth connectivity, improving upon its current version of machines that generate a QR code for smartphone users to then scan to activate the machine to dispense a drink. This eliminates one step in the process for customers and removes some friction in their in-store dining experience. The app’s map integration that shows nearby Freestyle machine locations appears to be a smart way to encourage loyalty among Coca-Cola fans who can customize beverages, save their favorite flavor combinations and quickly access and request them through the app upon entering a restaurant with the Freestyle machine.

So far, Coca-Cola has seen success with Freestyle machines overall. Since its 2009 debut, Freestyle machines have helped to drive soda sales for restaurants and traffic among customers. The company says that drink sales and customer traffic are up 8% and 3%, respectively, with the machines. 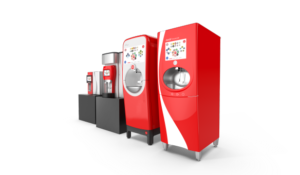 in recent years has integrated mobile into its broader digital strategy. The Freestyle app gives the company more insight into customer behavior, including how people respond to mobile offers. The company analyzes how people who agree to share their location through the app respond to promotions, coupons or other offers. In Japan, 200,000 vending machines are digitally enabled to engage with a mobile app. In China, 5 million transactions were recorded with an e-coupon that offers a free Sprite at McDonald’s every time the temperature is above 95° Fahrenheit, per the company’s annual report.

At the same time that Coca-Cola is leveraging mobile tech to drive loyalty among fans of its core soda products, the company is also working to reverse lost market share to less sugary drinks such as bottled mineral water, tea, coffee and sparkling water brands like LaCroix. The company boosted the sales volume of Diet Coke in the U.S. and Canada in Q1 2018 for the first time since 2010 by introducing flavors intended to appeal to the millennial palate, such as Feisty Cherry, Twisted Mango, Ginger Lime and Zesty Blood Orange in skinny cans, per CNN.

Coca-Cola Upgrades Freestyle Dispenser With Bluetooth, Mobile App Requests added by Newsroom on May 23, 2018
View all posts by Newsroom →