By Newsroom on February 6, 2017Comments Off on Everything Went Wrong on Purpose in Snickers’ Live Super Bowl Spot

Snickers worked to promote a new kind of Super Bowl ad in 2017: a live one. 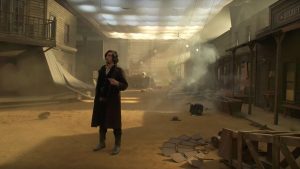 The effort from creative shop BBDO in New York leaned into Snickers’ core brand messaging—that you shouldn’t do anything important when you’re hungry—with an ad that falls apart just as it starts.

Adam Driver, of Girls and Star Wars fame, stared in the Western-themed spot which aired during the third quarter of the Big Game.

He, of course, ruins everything because he’s hungry, destroying the set of the ad.

The #SNICKERSLive #SB51 commercial did not go as planned. We apologize.

Everything Went Wrong on Purpose in Snickers’ Live Super Bowl Spot added by Newsroom on February 6, 2017
View all posts by Newsroom →