By Newsroom on May 3, 2018Comments Off on Leo Burnett London Captures The 2018 ‘Great Tastes Of America’ for McDonald’s

Following success over the last 12 years, McDonald’s ‘Great Tastes of America’ is back supported by an integrated campaign from Leo Burnett London that takes it to new levels. 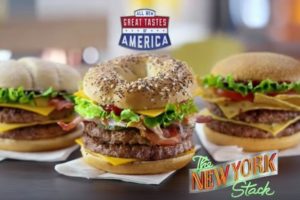 four films show everyday British folk going about their everyday mundane business with their friends and families before the inevitable subject of ‘what’s for lunch?” comes up. With the suggestion of a McDonald’s Great Tastes of America burger, they gradually and unwittingly transform into all-out Americans. The media campaign, planned and booked by OMD, is supported by eCRM and in-store activity.

Marco Ruggeri, Marketing Manager at McDonald’s, said: “Now in its 13th year, the Great Tastes of America promotion is hotly anticipated. Following the success of last year’s campaign, we wanted to continue to raise awareness and excitement. We’re driving appeal for an authentic taste of the States by encouraging our customers to ‘Go All Out’ whilst celebrating the limited-edition burgers in an even bigger, bolder and more ‘All Out’ way.”

Dan McCormack, creative director at Leo Burnett London, added: ‘This campaign ups the ante – positioning the current range of burgers as bigger, bolder and more American than Bruce Springsteen singing ‘Born in the USA’ on the 4th of July.”

Leo Burnett London Captures The 2018 ‘Great Tastes Of America’ for McDonald’s added by Newsroom on May 3, 2018
View all posts by Newsroom →