By Newsroom on February 25, 2016Comments Off on Lionel Messi Keeps Moving for Gatorade Global Push by TBWA/Chiat/Day

In anticipation of FC Barcelona’s UEFA Champions League match against Arsenal, Gatorade announced that Lionel Messi, five-time World Player of the Year, would star in his own Gatorade creative campaign, ‘Messi Don’t Go Down.’ The new campaign debuted with a 60 second TV and digital commercial available globally on Monday, February 22nd.

The creative campaign by TBWA/Chiat/Day, was filmed in November 2015 in Barcelona and highlights Messi’s unique style of play, in which he refuses to dive, flop or give in during adverse situations on and off the pitch. Messi’s message, according to the TVC, is that “life has more in store for you, if you just stay up.”

“I’m very excited about the message of perseverance in my new Gatorade spot,” said Messi. “I don’t know if there’s a secret to how I play, it’s something I’ve done since I was little. I always try to continue the play if I’m able to and life is no different. It’s important to keep moving forward through good times and through adversity.” 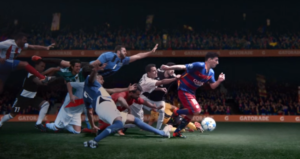 “Gatorade believes that athletic performance is driven from the inside, and that Messi and his style of play embody a similar spirit, which is to never to give up and to keep driving forward, both in the game and from a broader perspective,” said Anuj Bhasin, Head of Gatorade Global Marketing. “We’re extremely proud to be aligned with a star like Messi and help spread his inspirational message of toughness and resilience through this new content.”

The Gatorade TV commercial features a broad range of footage, and his amazing accomplishments during his time on his first team.

The spot can be seen on TV and on Gatorade’s digital media platforms across the globe, including in the United States, Latin America, Europe and India.

Lionel Messi Keeps Moving for Gatorade Global Push by TBWA/Chiat/Day added by Newsroom on February 25, 2016
View all posts by Newsroom →