By Newsroom on March 9, 2018Comments Off on Lonely Crane Driver Gets a Sweet Surprise in New McVitie’s Campaign by Grey London

McVitie’s has launched its new £9.7m master-brand campaign ‘Sweeter Together’ in collaboration with Grey London. The campaign explores the importance of real human connections and shows how the simple act of sharing a biscuit has the power to bring people together.

Sweeter Together launches with a heartwarming animated TV spot ‘Crane’, which is launching on UK national television at 7:50am on ITV. Produced by Nexus Studios and directed by Smith & Foulkes, the spot highlights the significant role the humble biscuit plays in everyday lives and highlights that ‘sometimes the little things are actually the really big things’. The music for the ad was developed by SoundTree’s Peter Raeburn, notable for his work on Jonathan Glazer films Sexy Beast, Birth and Under the Skin. 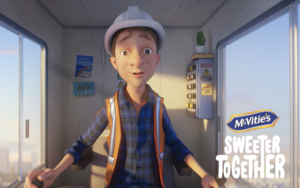 Sarah Heynen, VP of Marketing at pladis UK & Ireland, commented: “We know that despite being more connected than ever before digitally, we’re drifting further away from those real human connections that can mean the most. That’s why we’re so excited about our new ‘Sweeter Together’ campaign; because it has a very real message about the importance of togetherness. And we truly believe McVitie’s enables these moments every day.”

A second spot, ‘Brows’, will air later in 2018 as part of the campaign, telling the tale of a woman feeling nervous during her first day in a new job.

Nick Rowland, Creative Director at Grey London, said: “The humble biscuit isn’t going to change the world, but offering someone one creates a shared moment that can bring people closer. This is something that matters more to us now than ever and is why these stories of togetherness feel universal to us.”

Lonely Crane Driver Gets a Sweet Surprise in New McVitie’s Campaign by Grey London added by Newsroom on March 9, 2018
View all posts by Newsroom →