By Newsroom on April 23, 2018Comments Off on Lucozade Proves ‘Energy Beats Everything’ with Campaign of Biblical Proportions by Grey London

Lucozade Energy is taking its Energy Beats Everything campaign back to biblical times with the first ever telling of the David and Goliath prequel story.

The campaign, by Grey London, puts the rift between the young shepherd and his adversary in a more modern context, with a comedy film and an accompanying hand-painted oil poster. 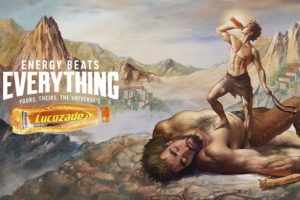 the commercial, when David wakes up feeling groggy one morning his friend delights in reminding him that, the night before, he had picked a fight with Goliath. “You can’t call people giants,” David’s friend warns, “it’s what got you into trouble in the first place.”

A booming voice suggests that Goliath has come to take his revenge, and David takes a swig of Lucozade Energy before grabbing a sling and venturing out to conquer his colossal foe.

The film was directed by acclaimed US comedy director Harold Einstein through Outsider.

The accompanying poster shows David standing victorious on the defeated giant, slingshot in one hand and a bottle of Lucozade Energy in the other. It reads, “Energy Beats Everything. Yours, theirs, the universe’s.” 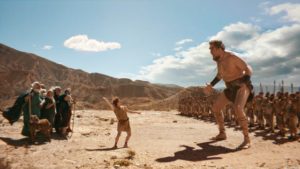 poster was hand-painted in oils by husband and wife team Boris Vallejo and Julie Bell, who are well known for their work in the fantasy genre. Boris’ artwork includes genre-defining illustrations for the original Star Wars trilogy, Tarzan, and Conan the Barbarian.

“David and Goliath” is the second film in the Energy Beats Everything campaign, which was launched in February through a partnership with the latest “Tomb Raider” film. Grey’s first ad spot put Lucozade Energy’s own epic movie-style voiceover onto real scenes from the film.

Steven Hind, Head of Marketing at Lucozade Energy, said: “Our ‘Energy Beats Everything’ platform allows for great creativity. Our Tomb Raider and David & Goliath adverts are two brilliantly unique and entirely separate creatives, but both deliver a simple truth to our consumers; championing the idea that with commitment and determination nothing will stop them.” 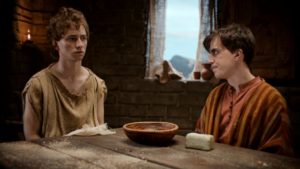 Pay, Co-CCO at Grey London said: “When you’re working with a brand as special as Lucozade Energy, you need to work with equally special talent to realise your ideas. Boris and Julie, and of course the genius that is Harold, were the dream team for the job, helping us bring to life the story of David and Goliath, and why it all kicked-off in the first place…”

The campaign runs in the UK and Ireland across TV, OOH, social and digital. Media is by MediaCom.

Lucozade Proves ‘Energy Beats Everything’ with Campaign of Biblical Proportions by Grey London added by Newsroom on April 23, 2018
View all posts by Newsroom →