By Newsroom on January 5, 2016Comments Off on Mars Rewards Life’s ‘Winners’ in Latest TV Campaign

Mars Chocolate UK has aired its latest ad for Mars bar, the latest installment in MARS’ ‘Winning’ campaign, in which it portrays the chocolate bar as a reward for conquering everything life throws at you.

The ad first aired on the 1st January, during the Coronation Street ad break.

The new advert follows the story of Alan as he tries to get into work on time, riding his daughter’s pink bike and accumulating a following of impressed onlookers as he arrives at work with two minutes to spare to enjoy his ‘reward’; a MARS bar. The action will be accompanied by Christina Aguilera’s 2006 hit ‘Ain’t No Other Man’. 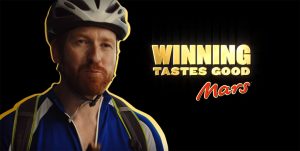 The ‘Bike’ commercial is intended to celebrate “those who take life by the horns” and follows on from the ‘Pan-flutes’ advert which aired in early 2015. The ad will run on TV throughout January and will be supported by online promotion on YouTube.

Mike Davies, the Marketing Director for MARS, SNICKERS and TWIX, claims the MARS bar has been “a go-to reward for generations of consumers”, and that the latest “tongue-in-cheek” ad is intended to “bringing this concept to life” in 2016.

The new ad campaign marks the beginning of a large investment in the MARS brand, with a proposed £10.6m media spend for further integrated marketing activity.