By Newsroom on January 26, 2018Comments Off on Natural Light Offers to Pay Down College Debt in Regional Super Bowl Ad

Natural Light is making a new appeal to cheap beer fans by offering some student debt relief. The Anheuser-Busch InBev economy brand will run a Super Bowl spot in 10 local markets to plug a new program in which it’s giving away $1 million to help people pay off student loans.

Because this is marketing, there’s a catch, of course. To enter the contest, drinkers must post a video on social media describing their “inspiration for going to college” that includes a shot of a green pull-tab from cans of limited-edition Natty Light packs now hitting stores. There’s a special hashtag, too: #nattystories. For all that work, folks get the chance to be one of 25 winners chosen by the brand to get $40,000 each to help pay off debt.

The ad, by Vice Media-run creative agency Virtue, is decidedly low-budget. It depicts a bunch of college kids doing the slip-and-slide down a college dorm hallway.

“Instead of spending all of our money on a national commercial we want to give that money back,” says Chelsea Phillips, who oversees Natural Light for AB InBev. Of course, the ad will be amplified on social media by people entering the contest. The brand also lined up actor Jake Johnson of Fox’s “New Girl” as a spokesman for the campaign. 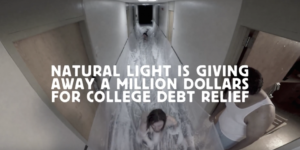 Natty’s sweet spot is legal-age college drinkers. But the campaign targets a wider audience. The song in the spot, Paula Cole’s “I Don’t Want to Wait,” is best known as the soundtrack of “Dawson’s Creek,” which ended its five-year run in 2003, making the song perhaps more resonant for Gen Xers than millenials.

The ad is “a little nostalgic because this is about stories and memories of all of those great times,” Phillips says. Natty Light also wanted to go after a broad target because it’s not just fresh college grads who are dealing with student debt. According to Pew Research Center, 37 percent of adults ages 18-29 have outstanding student loans. For those ages 30-44, 22 percent have debt, while 4 percent of people ages 45 and older are still paying off loans.

Natural Light Offers to Pay Down College Debt in Regional Super Bowl Ad added by Newsroom on January 26, 2018
View all posts by Newsroom →