By Newsroom on June 27, 2017Comments Off on Nescafé Azera and Twelve Tap into Young Design Talent to Launch Range of Iconic Tins 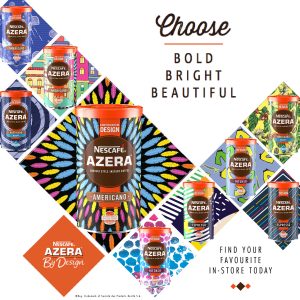 Twelve, the integrated brand activation agency, has developed a multichannel campaign for Nescafé Azera, with a range of iconic and desirable limited-edition designed tins at its heart, created in collaboration with top emerging design talent from the University for the Creative Arts (UCA).

The activity marks the third consecutive year that Nescafé Azera and Twelve have worked with UCA students, following the success of the brand’s previous “Azera by Design” campaigns. The collectable tins, available from mid June, will be sold in all four major supermarkets and available nationally across the UK.

Twelve developed the ‘Nescafé Azera By Design’ campaign to highlight the brand’s design credentials by bringing to life its support of promising young creative talent. Second year BA (Hons) Graphic Design students at the University for the Creative Arts were briefed to create a set of collectable coffee tins to feature on four Nescafé Azera variants. Students were briefed to create packaging designs that are inspired by the coffee-drinking occasion and evoke positivity.

Students had to present their ideas back to Twelve and Nestlé throughout the design process to help guide them on their creative direction. The shortlist of designs was selected by Twelve and Nestlé before a final nine designs were selected as the winners.

The limited-edition tins will be promoted via a multichannel campaign that will run across online, social, video, print and in-store POS.

The project, which formed part of the students’ October curriculum, kicked off with an initial briefing led by Twelve and Nestlé. As part of the project Twelve has offered two of the winning students placement opportunities at the agency over the summer to encourage their growth as designers and provide agency experience.

Twelve was the lead creative agency for the activity, responsible for delivering the initial campaign concept through to overall creative execution and media plan development, as well as the management of the collaboration with UCA.

Tom Pearce, Nescafé Azera Brand Manager, said: “Nescafé Azera by Design has been a great success for both the winning students and shoppers. The creative process offers students from UCA an opportunity to demonstrate their creative flair. Shoppers are also delighted in-store when they have their chance to choose their favourite Nescafé Azera tin designs. We’re confident that this year’s nine designs will set the bar even higher for the campaign.”

Derek Bain, creative director at Twelve who briefed and mentored the UCA students, said: “A live brief with a real client is something that all design students crave. It was a pleasure to work with such a talented group of designers who have produced such staggering work. By creating fresh limited-edition packaging year on year, Nescafé Azera has stayed relevant to its audience and made it the brand that its peers look to for inspiration.”

Nescafé Azera and Twelve Tap into Young Design Talent to Launch Range of Iconic Tins added by Newsroom on June 27, 2017
View all posts by Newsroom →