By Newsroom on September 27, 2017Comments Off on Nutella Asks Shoppers to Smile First for its New Mood Recognition Campaign 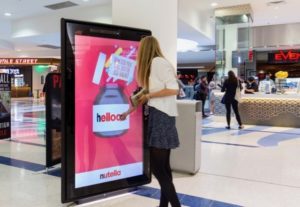 Shoppers’ facial expressions will determine the advertising creative they see on a new campaign for Nutella via oOh! and PHD that, in an Australia and New Zealand advertising first, uses facial mapping technology to determine their mood and personalises creative to match.

Using the Kinect camera built into oOh!media’s fully interactive Excite panels, the facial mapping technology will determine whether a shopper that is engaged with the panel is happy, inspired or grumpy and display an ad for a new range of mood-labelled Nutella jars.

When not directly engaged by shoppers, the panels will carry changing content depending on the number of shoppers walking by. For example if a group walks past at any given time the creative may say “Look at this dynamic duo! while if an individual walks by, it could be “You look stunning. Did someone say selfie?”

Blair Hamilford, oOh!media’s group director for retail said the facial mapping software, which does not capture or store personal data, added a new dimension to how Out Of Home advertising could be used to capture the attention of audiences.

He said: “Since its launch over 2 years ago the Excite network has engaged with over half a million people and we continue to find new ways in how to use technology, data and content to drive deeper engagement between brands and audiences. Our creative services team are always looking for ways that we can push the technology packed into our Excite panels to create more immersive brand experiences. From that notion, this concept for Nutella was born.

“Using the Kinect camera that is in all Excite panels we were able to not only analyse the facial expression of a person looking at the retail sign, but determine how many users are walking by to serve-up contextually relevant creative. Given the Excite panels will display the Nutella campaign exclusively, the creative on screen can change to focus on a single person, or groups of two or three, to catch their attention and encourage them to interact with the ad.

“Another important element of the campaign for us is that it’s the first to simultaneously run across Excite panels in Australia and New Zealand, allowing Nutella to reach a broad audience across two key markets.”

Melissa Haggerty, business director at PHD added: “Since Nutella is all about mornings we wanted to capture adult shoppers morning moods in a bespoke way that gets them thinking about Nutella. oOh!’s concept that incorporated the Kinect technology allowed for that more tailored approach.”

Michelle Hood, ANZ media and communications manager at Ferrero, said that the interactive panels were a great way to bring the morning mood concept to life.

Hood said: “The panels are an impactful way to interact with grocery shoppers, making them smile while introducing our new morning mood jars before they walk into store. We are also keen to try new ways to cut through the shopping centre environment and we are excited that we can do a cross-country campaign for the first time.”

The campaign will run on 25 screens in Australia and 15 screens in New Zealand over two weeks between 20 September and 28 September.

Nutella Asks Shoppers to Smile First for its New Mood Recognition Campaign added by Newsroom on September 27, 2017
View all posts by Newsroom →