By Newsroom on August 22, 2018Comments Off on Snickers Offers One for the Price of Two in Latest ‘You’re Not You’ Campaign

The Snickers ‘You’re Not You When You’re Hungry’ campaign has plenty of legs, as the latest effort by BBDO New York proves, asking people to get one Snickers bar for the price of two.

In the campaign, the brand is back to call out those making questionable decisions online, thus the one-for-two offer in a banner ad online. 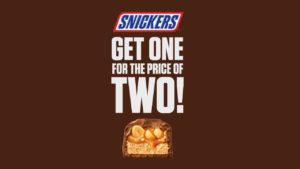 Those hungry enough to click on the banner ad promoting this deal are taken to a video featuring a concerned life coach questioning this decision. The bearded man in an overly comfortable sweater shows how truly caring he is, asking straight to the camera in a soft, metered tone, “Hey there, are you OK? You don’t seem like yourself.”

It echoes the catch phrase of the campaign in a one-on-one setting, acknowledging that people just aren’t themselves when they’re hungry. The man goes on to say that “we are just a bit concerned about you.”

The life coach then tells the viewer that he has a better offer, in the most overly sincere way possible – a new deal of $1 off when you buy two Snickers bars.

Snickers Offers One for the Price of Two in Latest ‘You’re Not You’ Campaign added by Newsroom on August 22, 2018
View all posts by Newsroom →