By Newsroom on February 9, 2017Comments Off on Springetts Designs New Range of Craft Beers for Twickenham Fine Ales’ Old Hands

Twickenham Fine Ales’ craft beer arm Old Hands has launched a never-before-seen in the UK hop to its range, Denali. The hop, which Old Hands has airfreighted in specially from the US, will be used in the latest addition to the Old Hands range – its American Pale Ale. 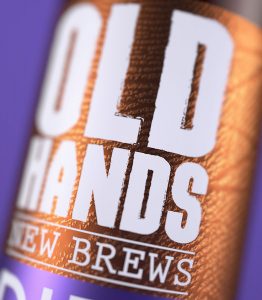 Packed with big, bold flavours of pineapple, citrus and pine, Denali is a new flavour to the world brewing scene as well as to the UK, and has up until now only been available to brewers looking to impart distinct, big flavour in their beers on a limited trial basis. The use of the new hop in the UK cements Old Hands’ place as a pioneering beer maker, and reflects the growing consumer demand for unusual and experimental brews.

Commenting on the latest innovations for Old Hands, Ben Norman, Marketing Director, Twickenham Fines Ales, said: “We are delighted to be bringing the Denali hop to the UK for this new beer, which we are confident will prove popular and build on our initial success with the Old Hands craft beer range. Twickenham Fine Ales was a forerunner for the use of now-popular American hops, and we’re proud to continue pushing brewing boundaries and enhancing the drinking experience for consumers by introducing and brewing unique hops and flavours. Our launch into cans is also an exciting new venture for us, and one we hope will continue our drive to reach new audiences for our beers.”

Springetts Brand Design Consultants have designed the full range for the brewery.

The launch of the Denali American Pale Ale will also see Old Hands beer launched in cans for the first time. Following a similar design to the Old Hands bottles, the new cans feature vibrant colours designed to reflect the lively nature of the London brewing scene, whilst the copper top is a nod to the experience and heritage behind each brew.

“We spend a lot of time in the brewery getting to understand the process of creating craft beers. What impressed us most was the skill and knowledge of the brewers at TFA – these were not fresh out of the city accountants following a dream to launch a beer. They were older, wiser and had a real knowledge of the craft of what makes a great beer. They had the certificates to prove it. The idea came from clear obvious advantage ‘it takes old hands to make new brews’,” revealed Springetts.

“The use of copper came from the barrel the brewers sat around in the brewery talking about hops and flavours. We printed a raised varnish of a rough handprint onto the copper so each bottle felt like shaking hands with the old brewer himself. The copper was a link to the tradition and craft of beer making. The second vibrant colour palette was created to illustrate the exciting new flavours and combinations the range launched. The final design had modernity, craft, confidence and standout. A design that reflected the skill that had gone into making the beer.”