By Newsroom on March 20, 2017Comments Off on Twix Escalates Rivalry Between Left and Right Twix by Giving them their Own Packs 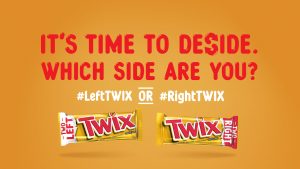 Mars Incorporated owned candy brand Twix, has built a whole campaign around a patently absurd concept—that there is such a thing as a “left Twix” and a “right Twix” in a Twix pack; that they’re somehow different from each other; and that they’re actually bitter rivals.

That campaign, silly as it may be, has been running for an impressive five years now, having been introduced at the Cannes Lions Festival way back in 2012. And now, the brand is upping the ante by extending the gag to the packaging—and rolling out specially marked Left and Right Twix packs.

At the same time, it’s acknowledging the ridiculousness of the whole concept in a pair of TV spots from BBDO New York that feature people who are the same, but different—like a mortician and an undertaker.

Twix Escalates Rivalry Between Left and Right Twix by Giving them their Own Packs added by Newsroom on March 20, 2017
View all posts by Newsroom →