By Newsroom on April 27, 2018Comments Off on Vitaminwater Features ‘Sorta-Fit Spokesguy’ to Inspire the Average Gym Goer

For many people, a trip to the gym is more chore than fun, and that’s the vibe of a new campaign for Vitaminwater Active.

Vitaminwater Active launched in 2017, championed as “the sports drink for the rest of us.” With the brand’s new ‘Sorta-Fit Spokesguy’ campaign, the message stays on target for the product – not taking itself too seriously while encouraging consumers to have fun with fitness. 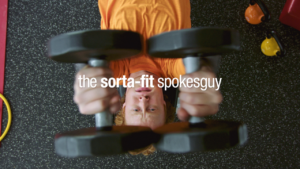 is an average Joe, a non-celebrity endorser who aims to not work out too hard yet further educate consumers on the existence and benefits of the product. The ginger-haired man is shown in a gym sweating, but not pumping iron. In one spot, he describes what being the ‘Sorta-Fit Spokesguy’ means.

“It means I work out, but I don’t take my shirt off. I lift weights, but I don’t look in mirrors, or if I do, I won’t make eye contact with myself…sometimes I’ll go to the gym and if I don’t find parking, I’ll go home,” he says.

Another spot has him saying that if people follow his workout program, they can “go hard and then also go home…because that’s where you live.”

The shorts will be running on social media where people can learn and share the product with ads and Instagram stories showcasing the ‘funner side of fitness.’ There will also be gifs to accompany the stills and videos.

The campaign, created by Zambezi, will also feature out of home high-impact billboards in major cities specifically near gyms, parks, running and hiking paths, plus experiential marketing will find the product being sampled in gyms and other fitness locations. 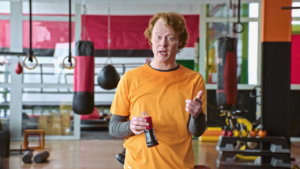 campaign comes on the heels of the brand’s celebrity endorsement with actor Aaron Paul, who brought an ease and flow with playful, music-focused spots featuring Paul essentially dancing on a treadmill while drinking Vitaminwater Zero.

Vitaminwater Active is the newest offering from Coca-Cola North America, and is billed as “a nutrient enhanced performance drink with electrolytes from natural sources (coconut water and sea salt).” It comes in three flavors: Move It (strawberry black cherry), Werk It (orange mango) and Pump It (lemon lime).

Vitaminwater Features ‘Sorta-Fit Spokesguy’ to Inspire the Average Gym Goer added by Newsroom on April 27, 2018
View all posts by Newsroom →