By Newsroom on July 25, 2013Comments Off on Aesop conceives Italy Live for Birra Moretti 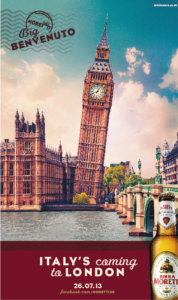 Aesop, the brand storytelling agency has created a unique live event for Birra Moretti – the authentic Italian beer brand – as part of an ongoing integrated campaign.

Building on the success of last year’s Pizza in the Piazza – which brought, great food, great company and great beer to some of London’s lunchtime hotspots – Italy Live is Birra Moretti’s most ambitious and audacious event to date.

On Friday 26th July, Italy Live will invite Londoners to dine with Italians via a live satellite link-up between Soho’s Golden Square and San Gimignano Piazza,Tuscany.

Londoners will have the opportunity to experience a truly authentic and delicious Italian lunch or apperitivo at the Moretti Table – complimented by a bottle of refreshing Birra Moretti.

Aesop, who conceived Italy Live, have partnered with Drive Productions, to bring this unique free event for Londoners to life.

Drive, who have a background in creating spectacular live and digital experiences are working with Aesop to produce the event in both the UK and Italy – ensuring that the technically demanding live link-up operates smoothly and that both locations merge seamlessly.

The event is being publicised via an advertising and PR campaign plus an on/off trade promotion – all being handled by Aesop.

The social media campaign is being managed by A Little Bird – including a highly successful Facebook prize draw promotion, which has generated in excess of 850 entrants.