By Newsroom on April 20, 2018Comments Off on Bareburger’s AR Menu Lets Customers Scan a Snapcode and See Any Dish Before Ordering

Fast-casual burger restaurant Bareburger expects to soon replace all of its paper menus with 3D models of its burgers and other items rendered in augmented reality, but for now, the company is preparing some rather interesting limited AR interactions.

The up-and-coming restaurant chain, framed by some as one of the hottest in the US, has partnered with augmented reality company Kabaq to soon recreate its entire menu in 3D and display those items in AR. Customers using Snapchat will be able to view the menu items by scanning corresponding Snapcodes. 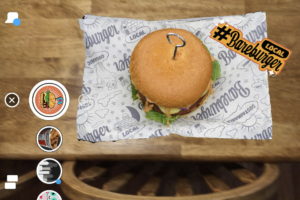 virtual menus aren’t quite ready for a full rollout just yet, though a Bareburger spokesperson notes that they are expected to be available in restaurants this July. However, you can get a sample of what the experience will look like by using Snapchat to scan a sample Snapcode found in the company’s promotional video.

In the meantime, Bareburger is getting its customers used to the idea of viewing virtual victuals via a giveaway. Between April 16 and 22, 100 random guests at each of its 35 US locations, as well as its Dubai restaurant, will receive a “Gold Snapcode” with their takeout or delivery orders. Winners will be able to scan the ticket to reveal what they’ve won via augmented reality (prizes will include very real burgers, fries, and onion rings). The company will also be able to evaluate the effectiveness of the AR campaign by analyzing data generated from customers’ interactions with the Snapcodes.

For Kabaq, the project represents a significant shift in its product strategy. The company has previously offered its 3D food-rendering platform through its own mobile app. But now, with the emergence of tools like Lens Studio for Snapchat and AR Studio for Facebook, the company has decided to leverage the competing social platforms as an alternative to requiring consumers to download a dedicated, third-party AR app.

Snapchat, restaurants had to invest in iPads [while] using Kabaq, but now, through Snapchat, we are creating new ways for restaurants to engage with their clients,” said Alper Guler, the co-founder and managing partner at Kabaq.

While an exact timeline for when the AR menus will make it into Bareburger restaurants is not yet known, the AR strategy checks off several boxes for Bareburger from a business perspective. In terms of marketing, the AR dynamic is an opportunity to generate word-of-mouth promotion as customers will be able to share photos and video of their AR-powered dining experiences through social media. And the AR menus could also improve customer satisfaction by helping customers get “exactly” what they expect when they order a menu item.

Bareburger’s AR Menu Lets Customers Scan a Snapcode and See Any Dish Before Ordering added by Newsroom on April 20, 2018
View all posts by Newsroom →