By Newsroom on April 7, 2015Comments Off on Carling Launches ‘Brighton or Barbados’ Promotion 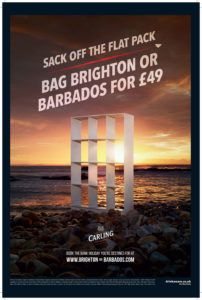 The campaign encourages consumers in the UK to make the most of their extended weekend, by entering the first come, first served promotion to book a two or four person bank holiday getaway for just £49 per person. The twist is that they won’t know until after they’ve booked whether they’re going to Brighton or Barbados (1 in 3 holidays will be in Barbados). The holidays will be delivered by Expedia, the exclusive travel partner for the promotion.

The promotion is supported by an integrated campaign, which began with out of home advertising in the run up to the premiere of the 30 second spot, that launched on Friday 3rd April. The TV creative will see the return of Dylan and Jon enjoying their bank holiday at a British seaside town but events taking an unexpected turn! The TV advertising will also be supported by a digital, social and print media campaign.

In the on-trade, promotional activity launched in April, in outlets across the UK. Selected outlets will be offering Carling drinkers the chance to instantly win holiday vouchers worth up to £500 so they can make the most of their bank holiday.

In the off-trade, an on-pack promotion will run exclusively with Sainsbury’s. Through unique codes in promotional packs of Carling, consumers can enter a free prize draw to win holiday vouchers. The promotion will be supported with in-store POS and targeted digital activity to Sainsbury’s shoppers.

Jim Shearer, Carling Brand Director at Molson Coors, says: “In a busy world of 9-5, Carling understands that great British moments, like bank holidays, are really important. Carling’s ‘Brighton or Barbados’ promotion is all about doing something memorable with mates and escaping the usual bank holiday jobs like gardening or DIY.”

Andrew Milner, Joint Head of Account Management at Creature, says: “’The campaign’s aim is to help the British public make the most of their bank holiday, offering them the chance to have a bit of an adventure… as opposed to the traditional wasted long weekend, washing the car.”

The advertising campaign creative was created by Creature, and is being supported through below the line developed by LIFE. Zenith Optimedia will be handling media strategy and placement across the campaign.

Carling Launches ‘Brighton or Barbados’ Promotion added by Newsroom on April 7, 2015
View all posts by Newsroom →