By Newsroom on August 30, 2018Comments Off on Elton John Enters The Rap Scene In New Snickers Ad by AMV BBDO

Captain Fantastic Elton John, best known for captivating audiences with bittersweet ballads and world-conquering anthems, is back with a bang in a new Snickers ad – but not as you’ve seen him before. The clever new ad, out September 1, 2018, sees Elton venture into the hip hop genre as the personification of American artist, Boogie, amidst a rap battle, when he’s lost his edge due to hunger. 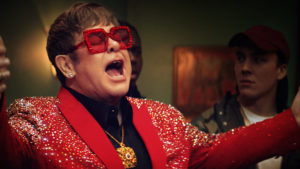 The film kicks off at a house party with an MC battle featuring up-and-coming talent, Emarr Kuhomano and Monique Lawz, before Sir Elton steps up to the plate wearing his iconic red glitter jacket and glasses.

Out of place in a cipher, Elton lets rip one of his biggest hits “Don’t Go Breaking My Heart,” humorously cringing the crowd. Oxford-born UK rapper Femi Nylander takes matters into his own hands, getting the beat back on track by offering Elton a Snickers bar – wherein the real Boogie returns on form. 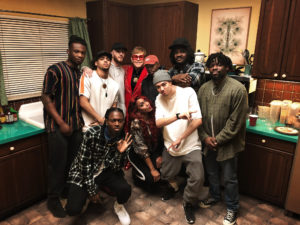 “Most people already know I’ve long been an advocate of hip hop and that’s why I wanted be a part of this – I got to hang out with Boogie and some great hip hop talent from the UK too,” said Elton John. “Moreover, I love the direction the new Snickers ads have humorously portrayed being off your game when you’re hungry, but in a way that’s current and relevant to young people, especially considering hip hop is one of the biggest music genres in the world today.”

“Building on the ‘You’re Not You When You’re Hungry’ theme, which has connected so well with consumers, we’re glad to see this latest instalment take the story a step further, said Dale Green, Snickers Global Brand Director. “When we developed the rap battle concept, we knew Elton John would be the perfect fit to help bring this to life. His unique blend of music, style and humour is instantly recognisable around the world and works well with our Snickers brand.” 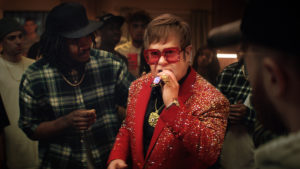 Boogie, who is signed with Eminem Shady Records, says: “Working with Elton on the set of the new Snickers ad was everything I expected and more – he’s generous with his time, funny and fantastically talented! Between him and fresh new hip hop talent like Femi Nylander, Emarr Kuhomano and Monique Lawz – it was an incredible coming together of multi-talented people.”

This latest ad by AMV BBDO, builds on the ‘Locker Room’ Snickers spot, which launched in 2012, featuring Joan Collins and Stephanie Beacham, and the ‘Mr. Bean Kung-Fu Master’ ad from 2014.

Elton John Enters The Rap Scene In New Snickers Ad by AMV BBDO added by Newsroom on August 30, 2018
View all posts by Newsroom →