By Newsroom on November 7, 2017Comments Off on Leo Burnett’s Digital Billboards For McDonald’s Change Depending On How Bad The Traffic Is 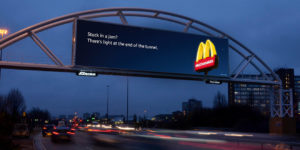 Getting stuck in traffic at the end of the day sucks, which is why McDonald’s hopes some new creative ad targeting will get you to pull over at a nearby restaurant and pick up a hamburger on your way home.

The fast-food chain and Leo Burnett are running an intriguing out-of-home campaign in the UK that targets drivers on busy highways at peak times of the day.

Digital billboards placed alongside the road feature a Big Mac when traffic is light, but once it starts to build, the creative switches to McDonald’s familiar golden arches with copy that reads, “Stuck in a jam? There’s a light at the end of the tunnel.” 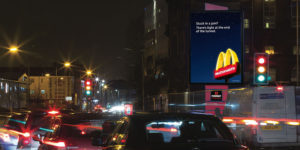 “Simple, tantalizing, recognizable product shots stimulate the appetite during fast-flowing traffic, while longer contextual copy lines run during heavy, slow-moving traffic, acknowledging the delays to deliver a relevant and powerful call to action,” said Dan Dawson, chief technology officer at Grand Visual, an out-of-home company that helped produce the campaign along with OpenLoop, which monitored real-time stats from Google Traffic API to determine which creative would be served to which billboard.

OMD and Talon managed the media buys for the campaign, which runs for the next week, across 10 cities in the UK. 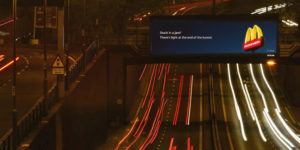 Leo Burnett’s Digital Billboards For McDonald’s Change Depending On How Bad The Traffic Is added by Newsroom on November 7, 2017
View all posts by Newsroom →