By Newsroom on February 13, 2017Comments Off on Mountain Dew Takes Hoops Culture To New Heights During NBA All-Star 2017

During NBA All-Star 2017, Mountain Dew is celebrating “the game beyond the game” through unique fan experiences. These experiences will come to life in a number of ways including: the launch of The Courtside Project at Courtside HQ, which brings together NBA players and trendsetters across style, art and music, and a 3×3 basketball game for elite amateur players featuring NBA All-Stars Russell Westbrook and Kyrie Irving as honorary general managers. Westbrook also stars in new DEW creative that dropped on February 13, where he challenges the expected with a new rallying cry: “don’t do ‘They’—do you.”

Russell Westbrook Ignites Rallying Cry: “Don’t Do ‘They’ – Do You” 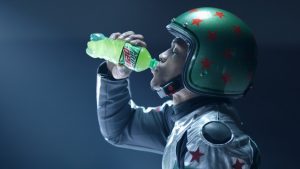 New creative featuring DEW partner and NBA All-Star Russell Westbrook will premiere on broadcast during Dew NBA 3X │ All-Star Edition airing Saturday, Feb. 18 at 6 p.m. ET on TNT. In the spot, Westbrook defies what “They” tell you to do – from sporting his signature “rule-breaking” style to ordering sushi in Oklahoma.

Westbrook is an athlete who constantly challenges the status quo, inspiring individuality. He truly embodies what it means to “Do the DEW” – that’s why he joined the DEW team in 2015 and recently renewed his partnership through the 2018-19 NBA season.

“‘Don’t do they, do you’ are words I’ve been living by for my entire life,” said Westbrook. “Working with Mountain Dew lets me help inspire people to be themselves, focus on what they want to achieve—and say goodbye to the rest.” 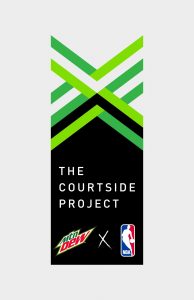 DEW will use NBA All-Star 2017 as its tip-off for The Courtside Project, a series of creative projects by NBA players, cultural creative icons and fans that will celebrate NBA lifestyle throughout the season. Through this boundary-pushing series, DEW aims to get fans closer to hoops culture off the court including everything from style and music to art and tech.

“Basketball’s influence extends beyond the sport into music, style, art and more. It’s the ‘game beyond the game’ and what we are celebrating through The Courtside Project in New Orleans and throughout the rest of the season,” said Ryan Collis, senior director of marketing, Mountain Dew.

The DEW All-Star fan experience, Courtside HQ, will serve as home base for these unique projects that celebrate hoops lifestyle. For the first project, DEW is teaming up with Don C. – hoops style trendsetter and founder of the luxury sportswear brand JustDon – to announce a Capsule Collection – Don C for DEWxNBA – to be released later this year.

“Growing up in Chicago, idolizing the greats from the game, the NBA has always been a source of style inspiration for me – from my first pair of sneakers to seeing the players walk down the tunnel on game days,” said Don C. “With this collection, I am excited to creatively expand on the ever present inspiration of the players, style icons and fans through my designs.”

For the second project, hip-hop artist, actor and long-time DEW partner Joey Bada$$ will be on hand to film the music video for the first live performance of his new track “Victory”—a love letter to basketball—which drops Wednesday, Feb. 15.

Additionally, players from the DEW roster, including 2017 NBA All-Stars Westbrook, Irving, Giannis Antetokounmpo and Isaiah Thomas, will be on-site throughout the weekend where they’ll let loose and give fans a glimpse into their passions off the court.

These appearances and projects will unfold in an undeniably DEW-themed space, mashing together classical architecture with DEW’s signature neon green, and will feature a full photo studio, designed and run by Brooklyn-based creative house, The Madbury Club. The space will serve as a hub for a rotating roster of NBA players, legends, musicians, DJs and NBA trendsetters.

DEW, Turner Sports and the NBA are teaming up to bring 3×3 basketball to a national stage in the first-ever DewNBA3X │ All-Star Edition, headlined by DEW NBA partners Russell Westbrook and Kyrie Irving who will serve as honorary general managers for their teams. A 30-minute special of the game will air on TNT on Feb. 18 at 6 p.m. ET.

To recruit the best talent, NBA legends and Turner Sports NBA analysts Shaquille O’Neal and Dennis Scott scouted the top elite amateur players from across the country for NBA All-Stars Irving and Westbrook. The chosen players matched up for intense, one-on-one elimination games to see who would make the cut and compete in New Orleans, where NBA legends Jason Williams and Baron Davis will captain the two teams.

With the help of these current and former NBA stars, the players will compete for the ultimate title in 3×3 basketball. The winning team will take home $10,000 and have the chance to compete in the invite-only NBA D-League National Tryout. Additionally, the winning GM – Westbrook or Irving – will receive $10,000 for his charity, the Why Not? Foundation or Best Buddies, respectively. 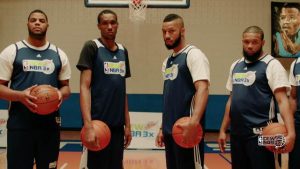 “Spanning Turner Sports’ footprint across television, digital, social and on-site at All-Star Weekend, Dew NBA 3X exposes fans to some of the best amateur basketball athletes in the country alongside the NBA’s best from past and present,” said Will Funk, EVP of sales and property sponsorships for Turner Sports. “This is a perfect example of a true partnership that dives deep into basketball sports culture and uniquely engages those fans across all platforms.”

A series of six episodes running on TNT chronicles the players and NBA legends on their journey to New Orleans, from the heated tryouts to the draft to build the best team. Watch episodes here.