Snickers Aids Forgetful Commuters on Valentine’s Day in the UK

By Newsroom on February 14, 2017Comments Off on Snickers Aids Forgetful Commuters on Valentine’s Day in the UK 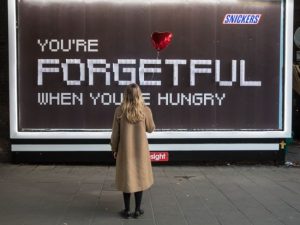 Over the next three days, the Snickers ‘You’re Not You When You’re Hungry’ campaign will help forgetful Londoners by running a special outdoor poster with the tagline ‘You’re Forgetful When You’re Hungry’ with the word ‘Forgetful’ made out of 3000 Valentine’s Day cards that people can peel off and take away to use.

On February 15th a second set of 3000 cards will be available for those who missed the big day altogether. These will read ‘Sorry I forgot. On the plus side, booking a restaurant should be easier. Happy Belated Valentine’s.’

Snickers has partnered with Primesight and AMV BBDO to develop the experiential advertising stunt.

You’re forgetful when you’re hungry. And on Valentine’s day, that could have been disastrous. But Snickers had your back. pic.twitter.com/sUqfZHNMqI

Snickers Aids Forgetful Commuters on Valentine’s Day in the UK added by Newsroom on February 14, 2017
View all posts by Newsroom →