By Newsroom on June 24, 2014Comments Off on Somersby In A Frenzy Over New Global Campaign

A new marketing campaign that kicks off in 20 countries demonstrates how a friendsie (a social version of a selfie), coupled with a Somersby, incites a feeling of togetherness and sharing. The campaign features a TV commercial with brand hero Lord Somersby who encourages people to look at life from a fresh perspective by getting together to share experiences and embrace the friendsie concept. The idea is that while friends enjoy each other’s company they can snap and share a #friendsie to preserve memories of great moments. 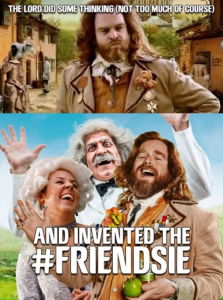 “Through this behaviour, momentum will be given to the friendsie concept and people will be encouraged to socialise in person,” says Anne Brøndsted Nielsen, global marketing manager for Somersby. “A great spin-off of this Somersby campaign could be that 2013, a year known as one of self-promotion (via the selfie), is followed by a year renowned for togetherness (via the friendsie). Imagine if friendsie was even declared word of the year in 2014.”

On Instagram alone, over 119 million #selfies have been uploaded, yet only a thousand #friendsies. In 2013 the Oxford Dictionary proclaimed selfie as word of the year.

In addition to the TV commercial, the Somersby campaign runs across several communication channels, with social media playing the largest role. It is also supported at point of purchase in on- and off-trade, and will include competitions to encourage people to snap a #friendsie while enjoying a cold refreshing Somersby.

Somersby In A Frenzy Over New Global Campaign added by Newsroom on June 24, 2014
View all posts by Newsroom →