By Newsroom on November 30, 2018Comments Off on Absolut Teams with Capital FM’s Roman Kemp and Dirty Martini to Give Away Taxi Rides

Absolut, the Pernod Ricard vodka brand, is giving away free taxi rides home over the festive period as part of its annual anti-drink-driving campaign.

The brand has partnered Capital FM DJ Roman Kemp and Dirty Martini bar for the “Better journeys home” campaign, which first ran in 2017. 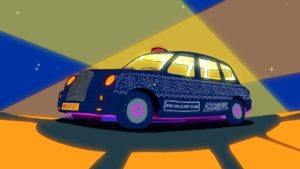 The service is running across London, Birmingham and Manchester throughout December. People will be able to enter a competition on Dirty Martini’s website to win a free ride.

It is supported by an animated spot that features Kemp and his friends in a taxi discussing tales of their journeys home, including a woman cutting her toenails on a night bus and jumping on a milk float. The film aims to encourage viewers to pick a safe way home.

Adam Boita, head of marketing at Absolut, said: “Drink-driving figures are unfortunately continuing to rise; so we wanted to think of a creative and fun way to capture the attention of those who are most at risk on the roads. Teaming up with Roman Kemp and Dirty Martini, our aim is to encourage as many people as possible to seek out safer and better journeys home this festive season and beyond.”

Absolut Teams with Capital FM’s Roman Kemp and Dirty Martini to Give Away Taxi Rides added by Newsroom on November 30, 2018
View all posts by Newsroom →