By Newsroom on May 4, 2018Comments Off on Budweiser Scraps ‘America’ Cans, Debuts New Brew Linked To George Washington 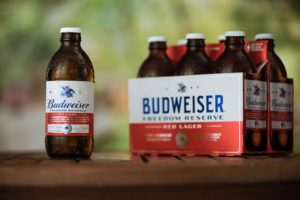 rebranded itself as “America” two summers ago, it was a risky move that mostly paid off, at least when judged by the amount of media attention it garnered. Even Donald Trump, then a candidate, weighed in, attempting to take credit. The brewer brought the “America” branded cans and bottles back last summer, and added a camouflage version.

This year, Bud is scrapping the special packaging in favor of a new patriotic approach–one linked to a founding father. Staring this month, the brew will roll out a limited-edition variety called “Freedom Reserve Red Lager” that the brand says is “inspired by George Washington’s hand-penned recipe from his personal military journal dating back to 1757.”

A portion of the proceeds will go to Folds of Honor, a nonprofit organization that provides educational scholarships to military families. Budweiser has partnered with the group for seven years, including on the America packaging.

The new Freedom Reserve brew will come in vintage stubby bottles as well as one-pint cans. Bud describes it as brewed with toasted barley grains “for a slightly sweet aroma with a touch of hops, a rich caramel malt taste and a smooth finish with a hint of molasses.”

Bud says the formula is inspired by a recipe preserved in manuscript collections of the New York Public Library. It appears in a notebook that Washington kept while he served as a colonel in the Virginia militia. The Digital Public Library of America has archived what looks to be the same original recipe, describing it as a type of “small beer,” which at the time was considered a blue collar beer. “While other, higher-quality alcohol was for the rich, who could afford the luxury, small beer was typically for paid servants,” notes the entry, entitled “George Washington Had a Killer ‘Craft’ Beer Recipe.” 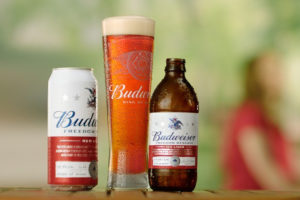 spokespeople stressed that while Freedom Reserve is inspired by the recipe, it is not a duplicate. It’s brewed by three Anheuser Busch brewers who are military veterans—John Williams, Bobby Walker and David Morris—whose signatures are featured on packaging. “With Freedom Reserve we remain dedicated to our mission to support our veterans and their families through our longstanding partnership with Folds of Honor,” Ricardo Marques, VP for Budweiser, said in a statement.

The special brew comes as Bud keeps tinkering with special-edition varieties in hopes of generating new interest in the brew, which has been in a long-term sales decline. In April, Bud announced that in September it will come out with a Reserve Copper Lager that is aged on Jim Beam bourbon barrel staves. Last year, Bud debuted 1933 Repeal Reserve Amber Lager, which claimed inspiration from a recipe used before Prohibition began in 1920.

While patriotic-themed marketing is fairly commonplace in the alcohol industry, Bud’s move to claim the “America” brand was seen as controversial. Some critics seized on the fact that Bud owner Anheuser-Busch InBev is based in Belgium, not the U.S. Of course, Budweiser has been brewed in the U.S. since 1876. In early 2016, Trump, foreshadowing his ascension to the presidency, quipped on “Fox & Friends” that the brewer is “so impressed with what our country will become that they decided to do this before the fact.”