Ferrero is Using the Oscars to Introduce Kinder Joy to America

By Newsroom on March 5, 2018Comments Off on Ferrero is Using the Oscars to Introduce Kinder Joy to America

A two-in-one treat that is sure to surprise and delight! pic.twitter.com/7lxguCRWA4

If you’re going to mimic theatrical trailer tropes like “In a World…” as part of your marketing campaign you might as well do so during the Oscars.

Ferrero did just that, positioning its Kinder Joy product — a chocolate treat that also has a toy inside — as a hero, of sorts, giving parents something different and fun to surprise their children with, in a new 30-second spot aired during the 90th Academy Awards broadcast on March 4.

This is the first time Ferrero has marketed Kinder Joy to consumers in the US; while the brand is known worldwide, it has only come stateside in the last couple of months. The new campaign, with creative by Publicis and media planning by PHD, is meant to make a “big splash,” according to Noah Szporn, Ferrero’s VP of marketing in North America. 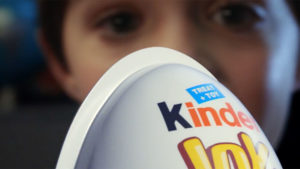 “Worldwide there’s huge awareness of the Kinder Joy product,” explained Szporn. “In the US, there’s very little to no awareness of it because the product just hasn’t been here. Our marketing challenge is to really quickly build that awareness up around the product and benefits as well as differentiate it to our target, which is consumer parents.”

Szporn continued: “The Oscars is basically the Super Bowl for millennial moms so that’s a huge opportunity to launch the Kinder Joy product in the US market. Knowing that all these moms are tuning into this, we thought we’d create a really cool campaign leveraging that moment as the launch for the product.”

Along with the television spot, the campaign is fully integrated and had a pre-, during and post-Oscars content on BuzzFeed and E!

Ferrero is Using the Oscars to Introduce Kinder Joy to America added by Newsroom on March 5, 2018
View all posts by Newsroom →