By Newsroom on September 28, 2016Comments Off on Kellogg’s & Leo Burnett London Launch ‘Because Yum’ Films On Social Media

Leo Burnett London has created a series of 18 short form content films for Kellogg’s to run across social media channels.

The agency developed the ‘Because Yum’ idea to encourage people to reappraise cereal as a potential snack, getting them to eat it at different times of day outside of breakfast.

Kellogg’s aims to build a carefree, cheeky spirit around their cereal through Because Yum, opening people’s minds to many simple and delicious ways to eat cereal.

Kellogg’s are tapping into different snacking occasions including elevenses, after school, and the post-gym moment whilst offering up a perfect cereal-inspired snack for that occasion – be that playdate lollies, a boxset treat, or a homework half time snack.

Leo Burnett London is collaborating with DigitasLBi on further social activity to support the films, including topical work that will encourage consumers to share their own snack ideas in the run up to Halloween.

The ‘Because Yum’ idea was originally created by Leo Burnett Chicago, and adapted for the UK market.

Charlie Martin, creative director at Leo Burnett London, said: “We want people to start looking at Kellogg’s as far more than just a breakfast cereal – this work is simply looking to inspire with new times to enjoy the products that are super easy and very tasty.” 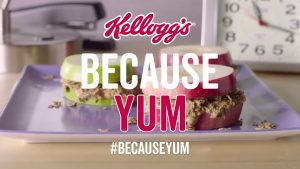