By Newsroom on February 26, 2013Comments Off on Ten Biggest F&B Companies Failing People Who Grow Their Ingredients

The social and environmental policies of the world’s ten biggest food and beverage giants need a major shake-up, said international relief and development organization Oxfam America as it launched its new global campaign called ‘Behind the Brands‘.

The research reveals that the “Big 10” food and beverage companies – that together make $1 billion-a-day – are failing millions of people in developing countries who supply land, labor, water and commodities needed to make their products.

“While some companies are doing better than others, no company has passed the test,” said Raymond C. Offenheiser , President of Oxfam America. “Some companies have made important commitments that deserve praise. But none are moving fast enough to help tackle hunger, inequality and poverty in their supply chains. No company emerges with passing grades.  Across the board all ten companies are failing.” 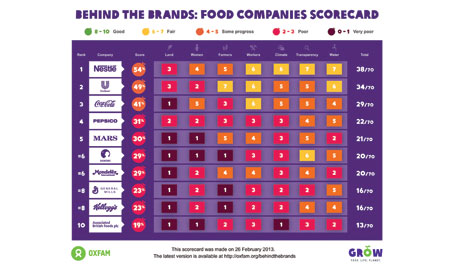 The ‘Behind the Brands’ campaign reveals:

“It’s time these companies take more responsibility for their immense influence on poor people’s lives,” said Offenheiser. “Eighty percent of the world’s hungry people work in food production and these companies employ millions of people in developing countries to grow their ingredients. They control hundreds of the world’s most popular brands and have the economic, social and political clout to make a real and lasting difference to the world’s poor and hungry.” 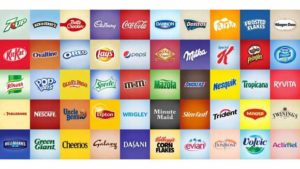 ‘Behind the Brands’ –part of Oxfam’s GROW Campaign – will launch in more than 12 countries including the US, Mexico, China, Brazil and across Europe.

Its first public action will target Nestle, Mondelez and Mars for their failure to address inequality faced by women who grow cocoa for their chocolate products.

Oxfam is also releasing a brief with first-hand accounts of the inequality that women cocoa growers face.

“No brand is too big to listen to its customers,” said Offenheiser. “If enough people urge the big food companies to do what is right, they have no choice but to listen.  By contacting companies on Twitter and Facebook, or signing a petition to their CEO, consumers can do their part to help bring lasting change in our broken food system by showing companies their customers expect them to operate responsibly.”

Ten Biggest F&B Companies Failing People Who Grow Their Ingredients added by Newsroom on February 26, 2013
View all posts by Newsroom →